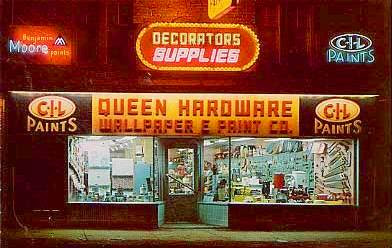 Queen Hardware, not sure of the date. 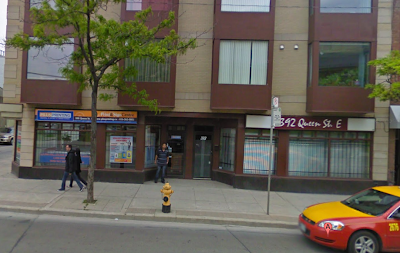 Club One Two/Then and Now 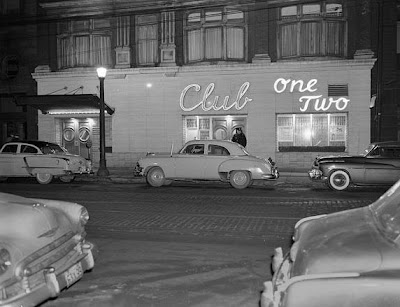 Club One Two located at 14 Adelaide East sometime in the mid 1950's. 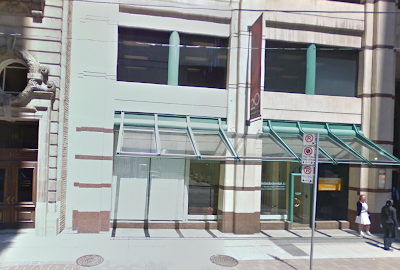 Labels: Club One Two/Then and Now 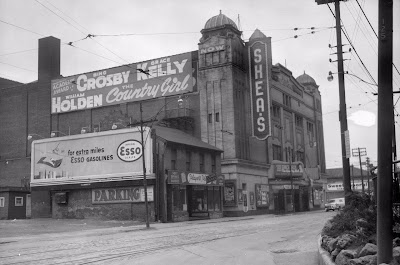 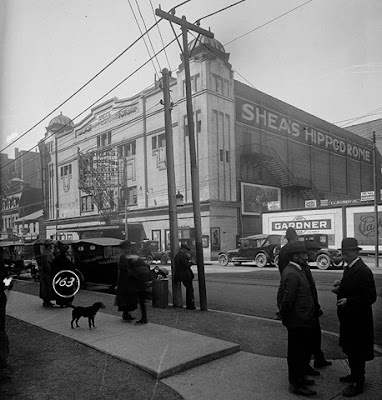 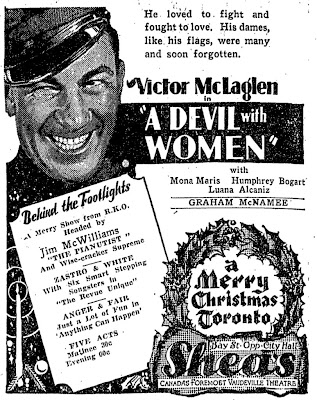 Shea's was demolished in 1956 to make room for the new City Hall.
From Heritage Toronto:
Shea's Hippodrome was one of the greatest vaudeville theatres ever built in Canada. It was the brainchild of Ontario-born Jerry and Michael Shea, famous theatre owners and builders who moved to Buffalo, New York and gained notoriety for designing spectacular theatres. In Toronto, prior to Shea's Hippodrome, they built Shea's Yonge Street and Shea's Victoria. The new Shea's would eclipse them both. Interestingly, the term Hippodrome, the Greek word for a horse racing stadium, eventually came to be used for large entertainment venues around the world. Located north of Queen Street, on Terauley Street (today Bay Street), Shea's Hippodrome was designed by Rochester New York firm L H. Lempert featuring a grand exterior with glass and copper domes that were illuminated at night. The front façade was finished in a decorative white brick design topped with the words Shea's Hippodrome that could be seen from a distance. In the centre of the façade was a copper marquee that advertised the acts for the night. When Shea's Hippodrome opened in April of 1914, it became not only the largest theatre in Canada but also one of the largest vaudeville theatres worldwide. In fact, the "Hipp" as it was known, was considered one of the big four vaudeville theatres in North America. As such, it featured some of the world's greatest acts including Etobicoke's very own O'Connor Sisters who once remarked that Shea's Hippodrome was their favoured theatre in the country. American actor Red Skelton who became a world famous comedian appeared at Shea's in the mid 1930's and once remarked "I really got started in a big way when I went to Shea's in Toronto." Inside was an elaborate auditorium with seats for some 3200 people. There were 12 grand opera boxes, an orchestra pit, decorative plaster mouldings on the ceiling and walls, and hundreds of lights that illuminated the space. Although initially built as a vaudeville theatre, Shea's, like many of its contemporaries, had to adapt to rapidly developing technologies in film including sound and technicolour. In addition to musical acts, theatre, acting, song and dance, Shea's featured films such as The Ten Commandments. Shea's Hippodrome was demolished in the late 1950's to make way for the development of New City Hall. 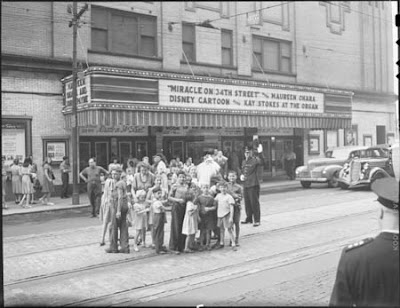 Bay and Elm/Then and Now 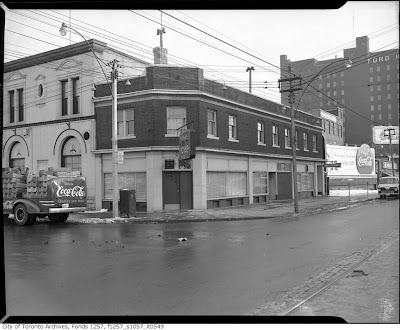 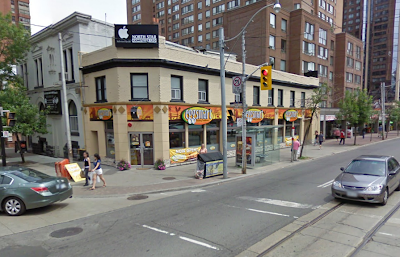 Labels: Bay and Elm/Then and Now

Bay and Queen/Then and Now 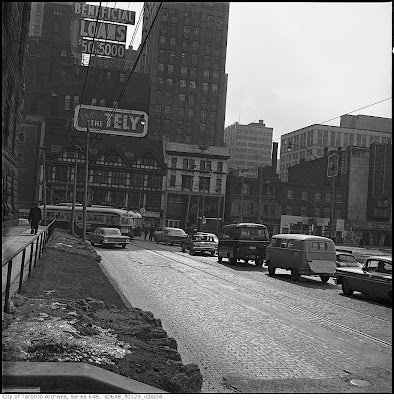 Looking south on Bay towards Queen in the early 1960's. This entire section of Queen would soon be demolished to make room for the new Sheraton Centre. 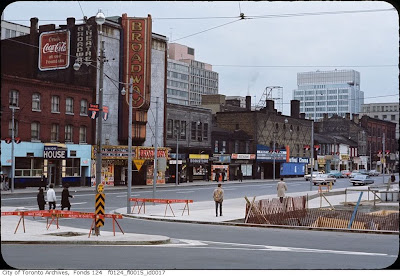 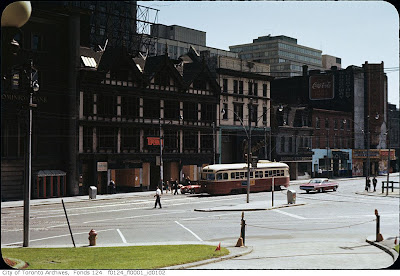 From Old City Hall looking west along Queen Street towards the old Broadway Theatre.
This was Toronto's first burlesque house with "Girlie" shows and movies.
In 1935, the manager was murdered in his office and his son-in law, Murray Little took over the management.
The infamous Casino Theatre (The Festival in the top photo) was located five doors west and operated until 1963.
In 1965 to preserve the architectural integrity of the new City Hall, the City expropriated three and a half acres on the south side of Queen Street and all of the buildings were demolished.
In these photos the work has already started. 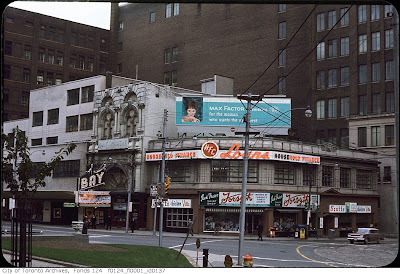 Looking across the south east intersection of Queen and Bay. . The film playing at the Bay Theatre is "The Small World of Sammy Lee", released in 1963.
The Bay opened in 1919 as The Colonial and the facade was built with material rescued from the demolished Customs House on Front Street.
This block has been replaced by the Simpson's Tower.

Window detail of the Bay Theatre 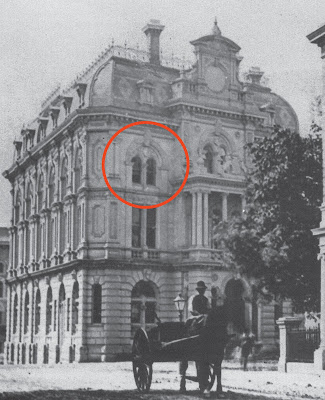 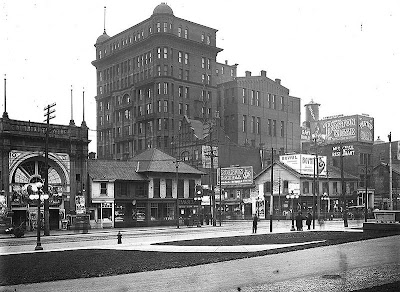 Another early view of the Colonial (far left) before the second story addition. 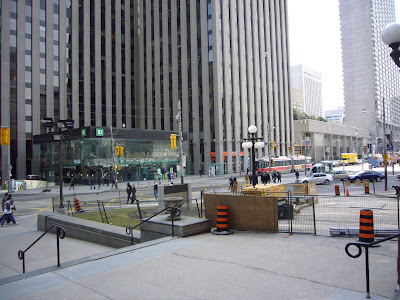 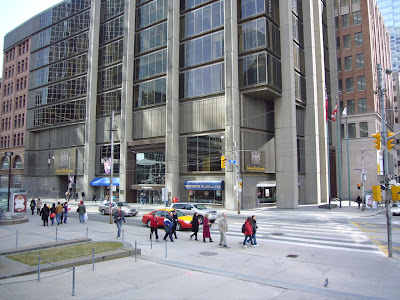 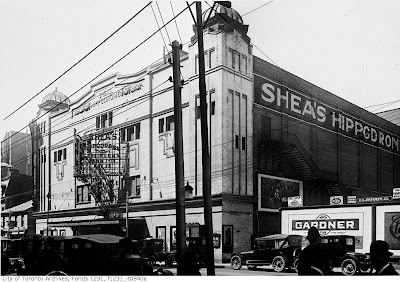 Shea's Hippodrome Theatre was demolished for the building of New City hall on the same site.

Spadina and College/Then and Now 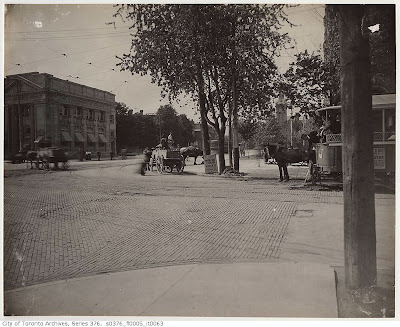 The N/W corner of Spadina and College at the turn of the century. 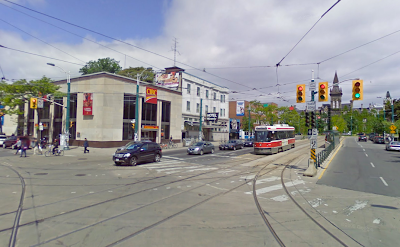 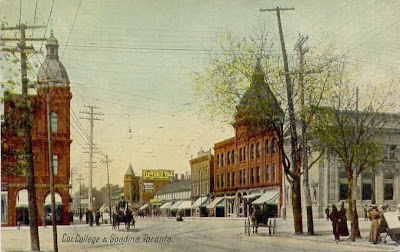 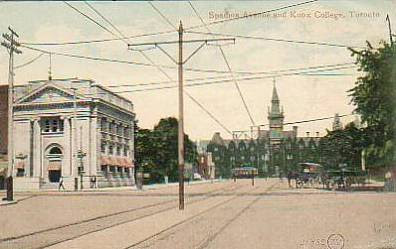 A couple of period postcards of the intersection.
Posted by GBC at 7:37 AM No comments:

Labels: Spadina and College/Then and Now

This is Why the Sixties Were Cool Update 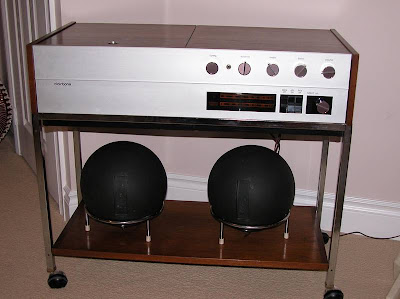 An original G3 Clairtone currently for sale on Kjiji @ $3500.00 which is actually (inflation adjusted) close to it's original cost of $2,850.00.
Introduced in 1966 to compete with smaller, more modular home electronics, the G3 was also the most affordable ranging in price from 350 – 400$ so many were sold. It came in a few variations of amp model and speakers and offered the option of rolling ‘bar cart’ stand. 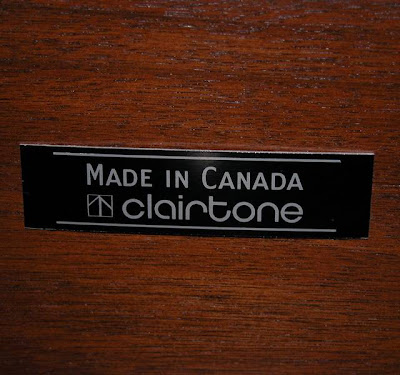 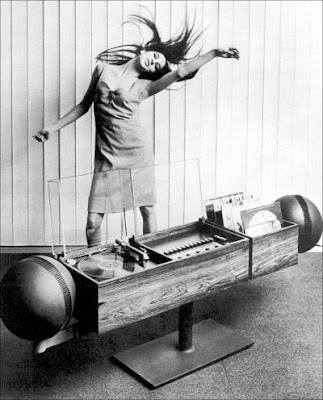 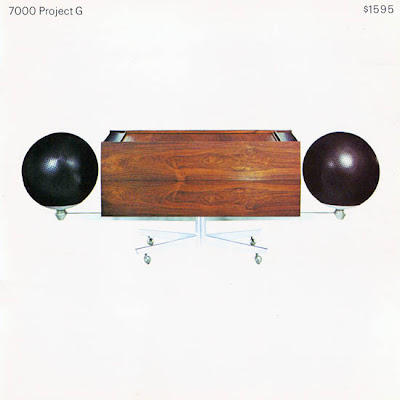 The Clairtone Project G console stereo. Using the inflation calculator, the price today would be approx. $12,000.00. For more information on the Clairtone G series please visit
clairtone.ca
Posted by GBC at 7:05 AM No comments:

Labels: The Clairtone Project G, This is Why the Sixties Were Cool
Newer Posts Older Posts Home
Subscribe to: Posts (Atom)