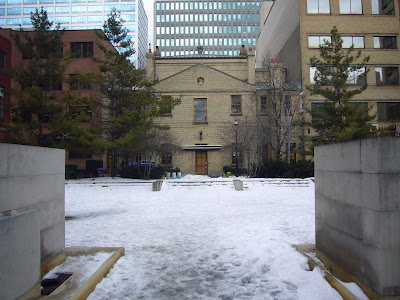 The Courthouse Square behind the old Adelaide Street Courthouse. Although it appears quiet and peaceful today, this wasn't always the case. According to a plaque on Alan Brown's website:

"Between 1826 and 1838, Court House Square was used for a variety of religious and political gatherings. David Willson and his Children Of Peace (builders of Sharon Temple in Newmarket) held assemblies here. Supporters of William Lyon Mackenzie rallied here after his ejections from the Legislative Assembly in 1832. With its proximity to the Home District Court House and the jail, the square was used for public floggings and for punishment in the stocks - their last recorded use: Ellen Halfpenny, for drunken and disorderly conduct in 1834. The first hanging here was on 23 October 1828: Charles French for the midnight shooting of Edward Knowlan. The most famous hangings, and the last performed here, were on 12 April 1838: Samuel Lount and Peter Matthews, for their participation in the 1837 Rebellion."
Posted by GBC at 10:48 AM