Queen and Dovercourt/Then and Now 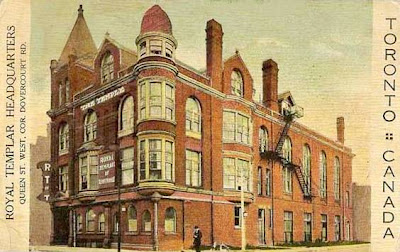 This building at the S/E corner of Queen and Dovercourt was originally a YMCA.
This postcard from 1914 courtesy of Chuckman's Postcard Collection shows it as the Royal Templar Headquarters. 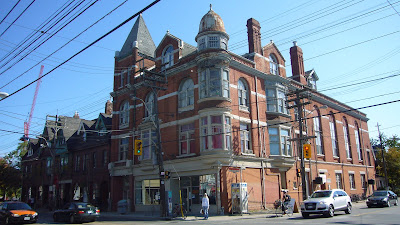 The Great Hall today.
A brief history from their site:
The Great Hall was built in 1889 by the founder of the Moore Corporation, Samuel J. Moore, Architects Gordon & Helliwell were chosen to design this four storey building. is approximately 30,000 sq ft. with a full basement. It housed the first west end YMCA in Toronto. The "Y" offered athletic facilities that included a gymnasium with a raised running track, and a basement swimming pool. Canadian native marathon star Tom Longboat worked out here when he won the Boston Marathon in 1907, as did chocolate magnate and accomplished amateur wrestler, Morden Neilson, it was also home to some of the earliest basketball games ever played in history.

In 1912 the property was sold to the Royal Templars of Temperance, who conducted business in the building until 1940's when there was a major shift in the buildings use. It was acquired by the Polish National Union, and soon, presses on the ground floor were rolling out copies of The Polish Voice newspaper. On the top floor, rooms were pressed into service as temporary shelter for Polish refugees fleeing the war in Europe.

In the mid 1980's the rumble of the presses were replaced by the sound of experimental music and avante-garde art. The Toronto School of Art eventually helped to establish 1087 Queen St. West as an important address for Toronto's arts community.
Posted by GBC at 5:50 PM 2 comments:

Labels: Queen and Dovercourt, The Great Hall, the Royal Templars

Why Not in Schools? 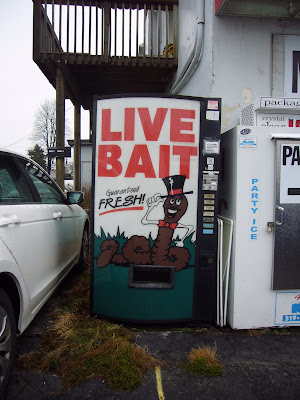 I've never seen a vending machine that sells worms...
This was in Cambridge Ontario.
Posted by GBC at 4:55 PM No comments:

Queen and Dufferin/Then and Now Update

After nearly 115 years Dufferin Street has be re connected with itself north of Queen..
When the original subway was built in 1897, Dufferin was severed at Queen to accommodate the underpass.. Last week the renovations were finished and traffic was able to cross Queen and move north. The cost of this new tunnel was $40,000,000. The original cost of the subway in 1897 was $20,000.00. 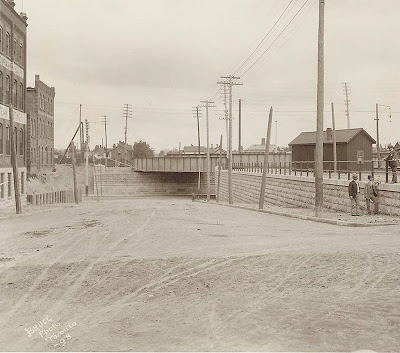 Dufferin looking north to Queen in 1897. 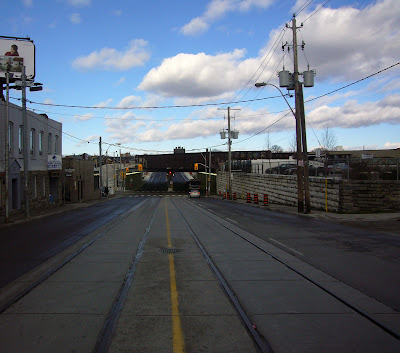 The same view in 2010 with the newly completed tunnel. 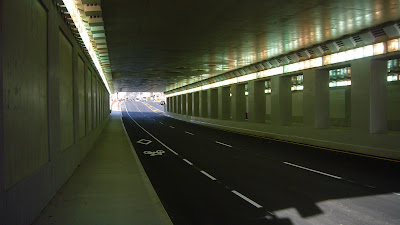