The Incredible Leaning House on Annette 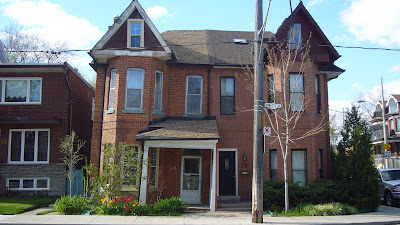 These semis on Annette near Keele have a serious lean. The one on the right was re-faced and "straightened" several years ago but the left hand side shows just how severe the angle is.
Most of the land south of here bordered by Annette to Bloor and Dundas to Keele was a swamp and was eventually drained to build houses. In fact the N/W corner of Keele and Bloor was the City dump up until 1910 or so.
Posted by GBC at 5:48 PM No comments:

Parliament and Gerrard/Then and Now 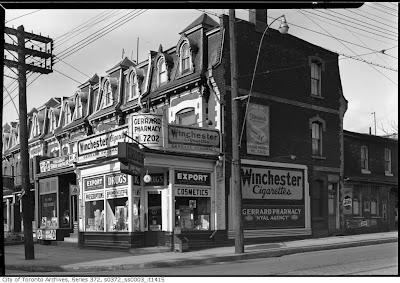 The N/W corner of Parliament and Gerrard in the 1930's. 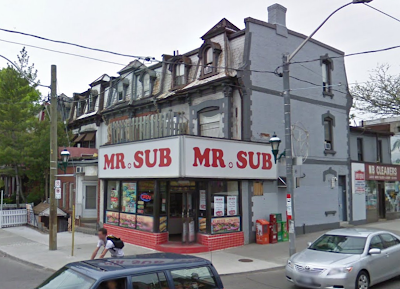 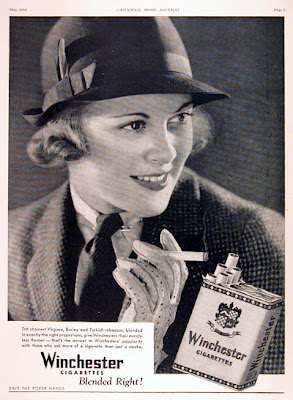 Winchester (Canadian version) were manufactured by Imperial Tobacco and discontinued in 1966. 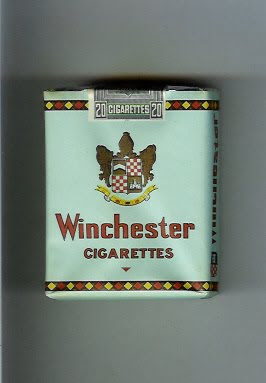 A vintage commercial for the American version sung to the tune of Santana's "Evil Ways".
Posted by GBC at 9:16 AM 3 comments:

Labels: Parliament and Gerrard/Then and Now

The station sign off video about Toronto from the 80's from the original City TV channel 79.
Toronto, People City. It's a great song by Tommy Ambrose. 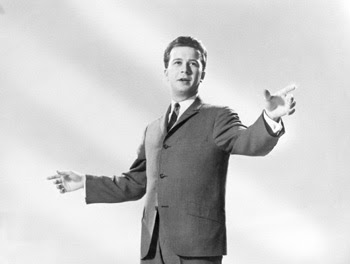 One of Canada's most versatile popular singers and songwriters, Tommy Ambrose starred in his own half-hour show of music, variety, dance, and comedy. Produced by Stan Harris (196l-62) and Bill Davis (1962-63), and written by Stan Jacobson and Bernie Rothman, in addition to Ambrose and his guests the program featured an eight voice chorus, under the direction of Gordon Kushner, and a twenty-five piece orchestra conducted by Lucio Agostini, with arrangements by Rick Wilkins. Choreography for the show was by Glen Gibson.

During the summer of 1962, the network presented a dozen repeats from the previous season, under the title, The Best Of Tommy Ambrose.

Labels: Queen and Bathurst/Then and Now

King and Queen/Then and Now 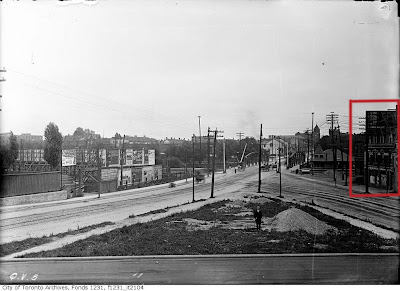 Looking east across the intersection of King, Queen and River in 1910 or so before the bridge was built. The building(s) outlined is shown in detail below and was demolished to accommodate the construction of the new interchange. 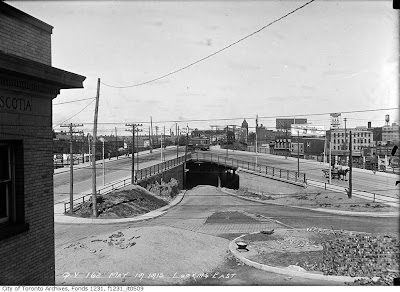 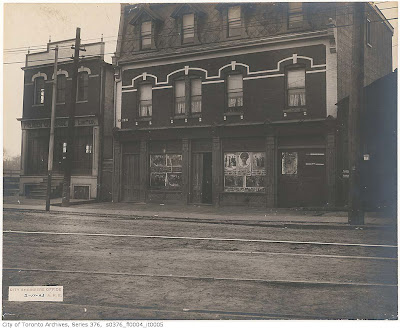 There are more photos of this block here. 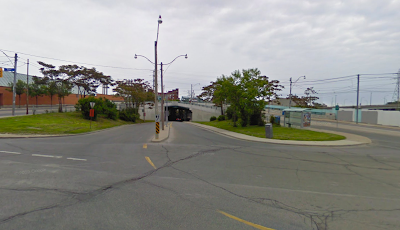 A somewhat current view even though the angle is wrong.
Posted by GBC at 6:50 AM No comments: