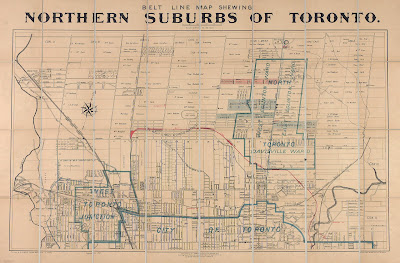 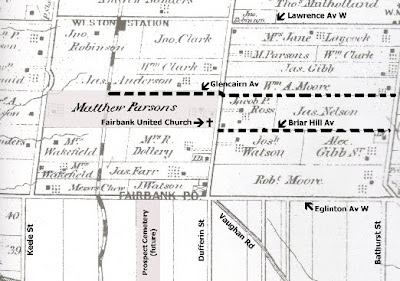 A brief history of Fairbank by Paul J. McGrath
While it never actually achieved “village” status, Fairbank’s is nevertheless an interesting lost village of Toronto. Named for the farm of Matthew PARSONS, this village was found in the area of Eglinton Avenue West and Dufferin Street. It was called “Fairbank’s Farm”, but the people of the area called it “Fairbank’s”. Today most people simply refer to the area as “Fairbank”.

In 1835, at age 19, Matthew left his father’s farm; he purchased a large 200 acre parcel of land which had originally been deeded to Jacob ANDERSON. The land was located on York West Concession III, Lot Nº. 3. Concession III ran between present-day Dufferin and Keele Streets. Lot 3 was north of the present-day Eglinton Avenue West, half-way to Lawrence Avenue West. Matthew named his new farm “Fairbank”, although why he chose that name is lost to history.

Matthew then set about clearing his land. In 1837, he was accused by the government of being a sympathizer of McKenzie’s Rebels. He was arrested, but soon released when no evidence could be found. Matthew married Elizabeth McKAY of York Township on November 11, 1841; his brother Jacob and Elizabeth’s brother William were the witnesses.

Others soon followed to the new “village” of Fairbank. A list of residents in the 1860s included Robert and William A. MOORE, Joseph WATSON, Alexander and James GIBBS, Joseph and Jacob P. ROSS, James ANDERSON, and the DOLLERY brothers, Isaac, William and Henry.

As with the rest of Toronto, the 1870s saw the building of several hotels and taverns in Fairbank, including one operated by Rodolphus WILSON and another by Francis McFARLANE (who was also postmaster). New residents of the area included John THOMPSON, Henry SANDERS, and James TYLER (butcher and drover), to name a few. 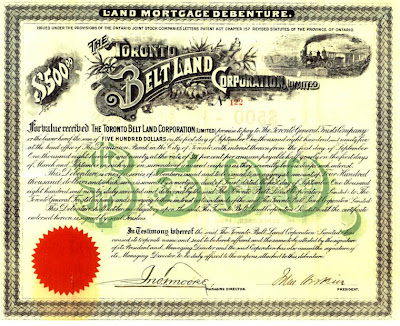 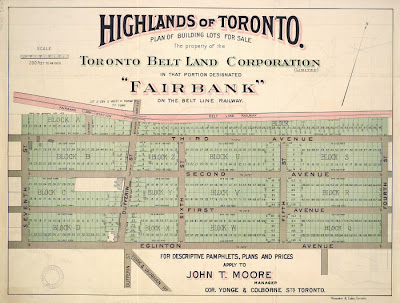 By the late 1880s land prices and rents were high in the City of Toronto, so developers tried to entice people to build homes in the suburbs (sound familiar?!). In 1889 the Toronto Belt Line Company was formed by a group of prominent Torontonians to construct and operate a radial railway around the City’s suburbs to provide commuter service. Fairbank was chosen as one of the station stops on the Beltway.
The real-estate arm of the company had grandiose plans, promoting areas such as Fairbank as the “Highlands of Toronto”. Construction of the Beltway began in 1890 using existing Grand Truck lines. Their timing, however, could not have been worse. Excessive promotional expenses, combined with a huge downturn in real estate values caused by the recession of the early 1890s, meant that the line was in trouble before it began operations. GTR had to step in to complete the project which opened for operations in July of 1892. The fare was only 5 cents between stations, but ridership was not enough to keep the line afloat. A rival line, the Toronto and Suburban Railway Company, provided a more convenient schedule, and helped put the Beltway out of its misery; it ceased operations after only 28 months. The only remnant of this once grand transportation scheme is the Belt Way bridge which crosses Yonge Street just south of Davisville.

In the 1860s, a one room school was built for the “village” using bricks manufactured from clay on the PARSONS farm. As well, in 1889 Matthew donated a small parcel of land at the southeast corner of his lot to build the Fairbank Methodist Church. Now known as the Fairbank United Church, it stands today on Dufferin Street, just south of Wingold Av.

The “village,” meanwhile, remained part of York West Township until it became part of Metropolitan Toronto in 1953. An amendment to the Toronto Act in 1966 allowed York to become a Borough. It incorporated as a City in 1984, although it was eventually amalgamated into the City of Toronto in 1998.

Although the real estate term “Fairbank” now includes the area south of Eglinton, this whole area did not see significant development until well into the 1920s, ‘30s and ‘40s.